Gary Best and his wife, Tracey, are both originally from Northeast Ohio and wanted to live in the beautiful community of Middlefield after he served twenty years and then retired from the United States Navy. Mr. Best thoroughly believes in assisting others in times of need so he became a licensed funeral director to serve the community.

Gary, a native of Conneaut, Ohio is a 1985 graduate of Ashtabula St. John High School. Following graduation, he entered the United States Navy where he served: aboard ships; USS Affray, USS Leader, USS Adroit, USS Warrior (plankowner), and USS Inchon; as a recruiter in Vermont and New Hampshire; on a battle group staff position as the Damage Control Officer; and as the Senior Enlisted Leader of the Naval Reserve Center in Akron, Ohio. He is a Veteran of both Gulf Wars and provided assistance to refugees during the Kosovo Conflict.

Gary began his interest in the funeral industry in 1999 while stationed aboard USS Inchon in Corpus Christi, TX. He volunteered to work at a funeral home and it was during that time he received his calling. During his final tour in the U.S. Navy, Gary volunteered to serve as the Command Casualty Assistance Calls Officer for Northeast Ohio. He served eleven military families during his tour. Since his time in Corpus Christi, Gary has been involved with several other funeral homes in Ohio, Virginia, Florida, Pennsylvania, and North Carolina. He now intends to bring the knowledge and experience he has learned to serve those in the Middlefield/Rock Creek areas with dignity, compassion, and respect.

Gary graduated from Granite State College, Excelsior College, and the Pittsburgh Institute of Mortuary Science. He is a licensed funeral director and embalmer in the States of Ohio and North Carolina and holds a certificate for “Counselor” from the Navy National Apprenticeship Program. He is currently a member of the Veterans of Foreign Wars in Middlefield (Life Member), Disabled American Veterans (Life Member and previous Chapter Adjutant), Embalmers Association of Cleveland, Ohio Embalmers Association, Ohio Funeral Directors Association, and Past Board Member of the Middlefield Historical Society. Gary is also a Past Master and the current Treasurer of Western Phoenix #42 Free & Accepted Masons of Ohio in Parkman; four time and Current High Priest of the Grand Chapter Royal Arch Masons of Ohio, Grand River Chapter #104 in Rock Creek; Current Illustrious Master of Grand Council of Royal and Select Masons of Ohio, Geneva Council #145 in Madison; and Past Commander of the Grand Commandery Knights Templar of Ohio, Eagle Commandery #29 in Painesville.

Tracey recently retired from being an Advanced Language Arts and Reading teacher at Chardon Middle School after 25 years. She is now the owner/operator of Best Custom Embroidery, LLC and also helps at the funeral homes. Tracey graduated from Kent State University with a B.S. in Elementary Education, and two Master’s Degrees in Curriculum and Instruction as well as Gifted Education.

Tracey and Gary have three children between them. The eldest, Brett, is self-employed and working in real estate and culinary arts in Orlando, FL. Audrey, a graduate of Chardon High School and Kent State University, is an Ensign in the United States Navy Nursing Corps. She is currently stationed at the Naval Hospital in Portsmouth, VA. The youngest, Noah, is entering his Senior year at Chardon High School. He enjoys playing multiple percussion instruments in Band, and of course, video games. Noah is planning on pursuing a Degree in Marine Biology upon graduation.

We believe that during time of need, families need to rely on dependable, trustworthy, and compassionate people. Through his life experiences, Gary has chosen this profession as a second career not because he had to, but, because he chose to. That difference alone will help him serve family members with the dignity and respect they deserve. 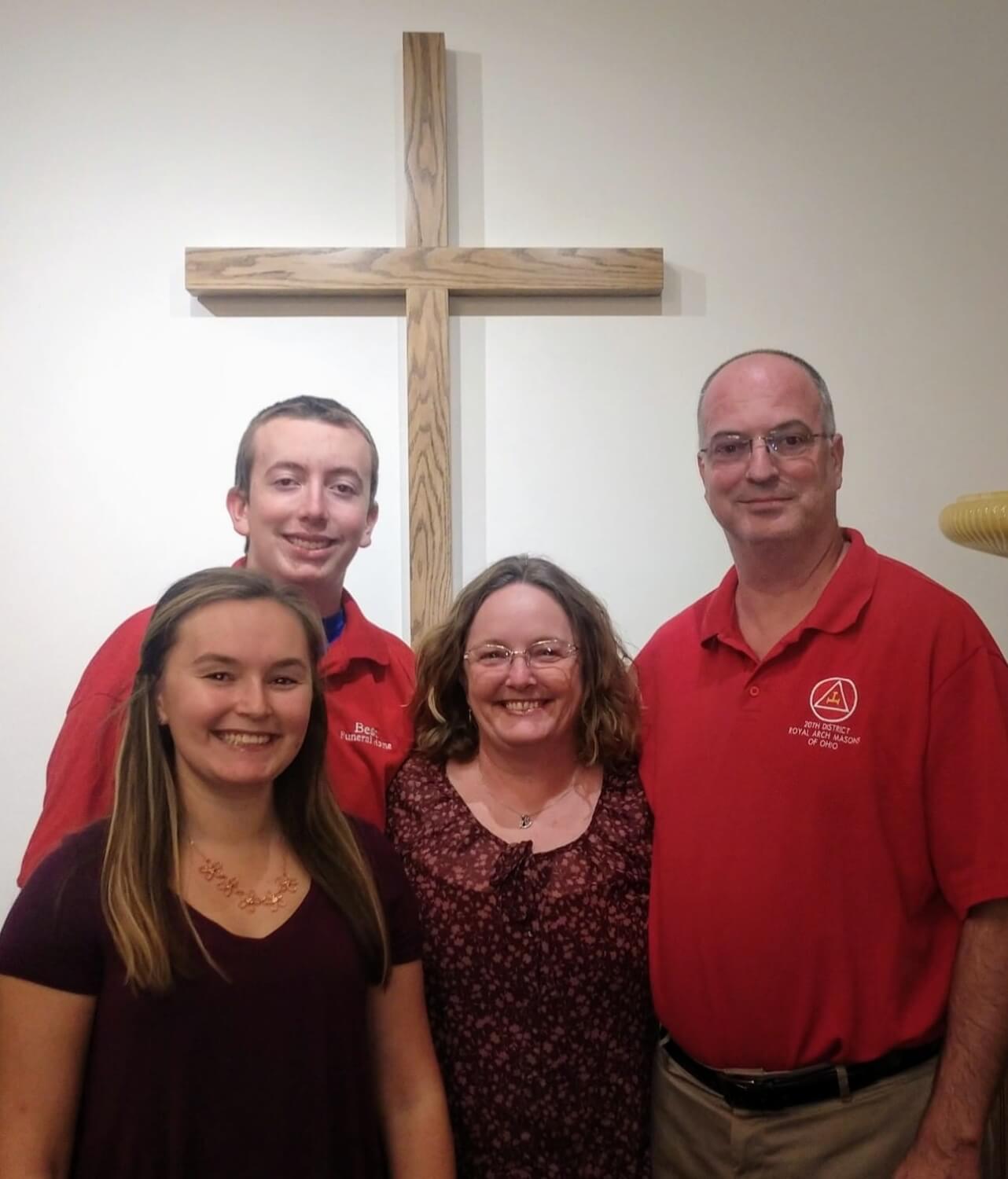 We are always interested in hearing from the families that we serve.

Please take a moment to let us know how well we served you in your time of need. We very much appreciate your feedback.

I cannot express enough how grateful we are in the handling of my dear husband during this very difficult time. Gary went over and above to accommodate all of my requests, questions, changes etc. and truly empathized with me for our great loss. I am recommending them to family and friends, when they have to make these difficult choices.

Thank you so much for your professionalism, kindness, and grace in planning services for our dear mother, Pearl Franklin. Everything was beautiful and you were truly wonderful to our family. We couldn’t have asked for anything better. Much love to the Best Family from our Franklin Family.

Thank you for your services in time of need. You are a part of our family and all family's during this devastating time for all god bless all prayers. Your services will never be forgotten.

Efficient, accurate, organized, thorough, thoughtful and caring. A great experience for us in a tuff time. Gary made it easier. 2 deaths in 1 yr. for us. Glad to have had Gary’s help and care with the loss of our father and mother.

I highly recommend Best Funeral Home! They were there for us in the time of need losing our beloved pet. Caring and kind owners of the funeral home I will never forget during the most difficult time. Thank you!

Click below to view Our Story, "Building a Dream!"